Islay Archaeology Week 2017 began at the Islay Agricultural Show on Thursday 10 August where the Islay Heritage marquee provided an exhibition about the earliest human settlement on the island. This was of Stone Age hunter-gatherers, who first arrived on Islay 12,000 years ago and continued throughout the Mesolithic people until the start of the Mesolithic around 5000 years ago. To bring the exhibition to life, an exhibition of prehistoric flint knapping was provided by Will Lord – in complete hunter-gatherer attire. Will showed how flint arrowheads, knifes and scrapers could be made from Islay beach pebbles, replicating the stone tools found at the Mesolithic sites on Islay. 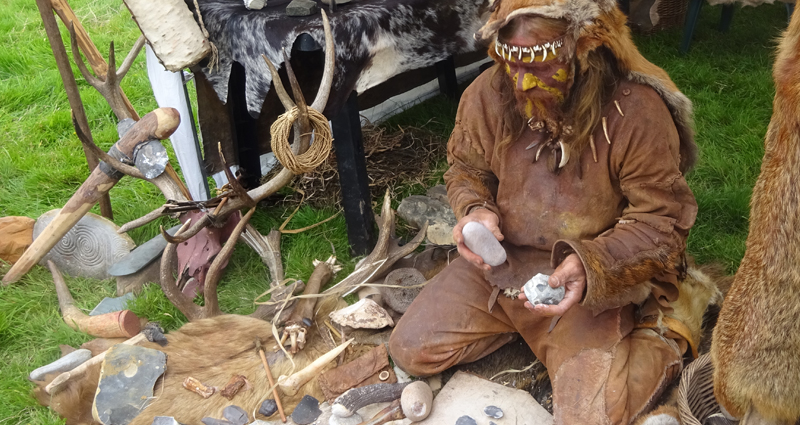 On Friday, Saturday and Sunday afternoons, Steven Mithen led guided walks from Nerabolls Chapel to the Giant’s Grave excavation. Around 20 people joined each walk, a mixture of visitors and residents, who climbed the slopes of Ben tart a’ Mhill along the paths through Balimony Forest to reach the dig. During short rests along the way, Steven give an outline of the prehistoric settlement on Islay up to the arrival of the Neolithic and the construction of the first monuments on the island. This prepared the group to see the excavation of one of those monuments, the Giant’s Grave. Dr Darko Maricevic, Director of the excavation, provided a tour of the site, explaining what had been found and what work remained to do. And then back down the hill, to complete a lovely three-hour walk. 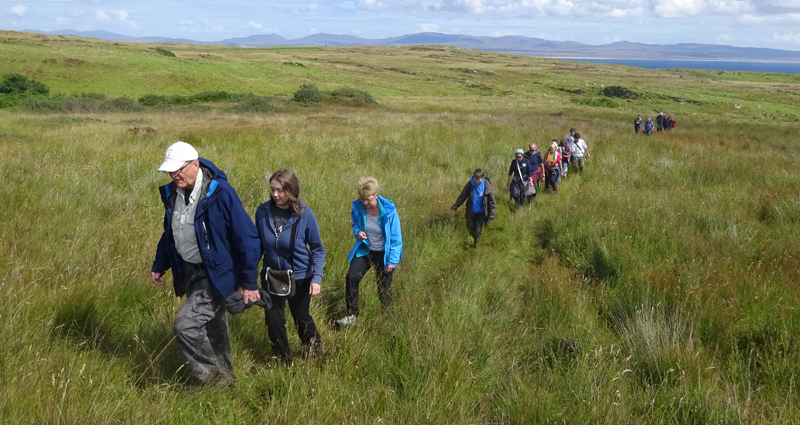 To complete the week, Steven Mithen gave three public lectures – one each on the Monday, Tuesday and Wednesday evenings – with each attracting an audience of around 50 persons. The first, called Imagining Kildalton was in Ramsay Hall, Port Ellen, and described the digital reconstruction of Kildalton Chapel. This was followed by a lecture in the Natural History Centre at Port Charlotte  called First Footsteps on Islay. That described the new excavation at Rubha Port an t-Seilich with its exciting discovery of ice age stone tools, some of which were brought to the lecture for the audience to handle. The last lecture, Forgotten lives of the Ileach was given at the ICCI in Bowmore and described the Islay Heritage’s archaeological survey of Dun Fhinn and the deserted settlements in the vicinity of Kintour River. These include Staoin, Balore and Creagfinn for which there are historic records of their occupants in the late 18th and 19th century.

The lectures are available here: 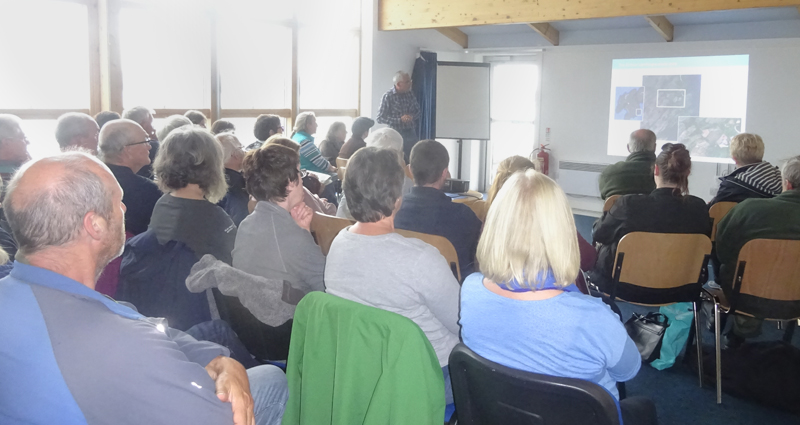 Here are some of the comments from those who visited Islay Heritage at the show, joined the walks or attended the lectures:

‘Fascinating – Islay Heritage is such a good development on the island’

‘Very interesting and informative talks looking forward to the next set of talks and finding out what you find at these sites!’

‘Sparked my imagination as to how the chapel might have appeared!’

Forgotten Lives of the Ileach