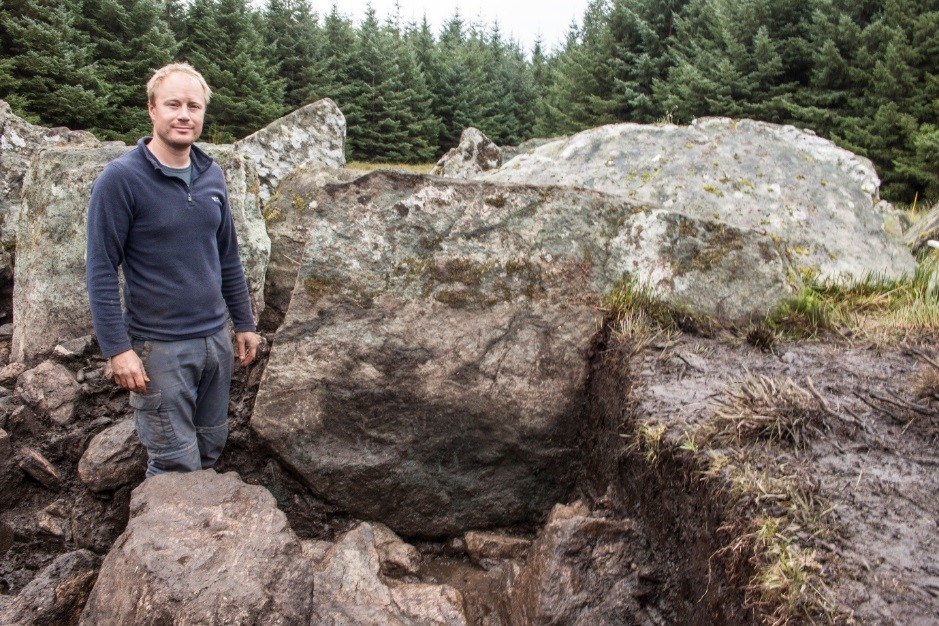 August 2017 saw the completion of the third and final season of excavation at the Early Neolithic Clyde-type chambered cairn at Slochd Meseach near Neraebolls, better known as the Giant’s Grave. These followed excavations in 2015 and 2016, the first of which focused on a series of test-pits and an initial geophysical survey and the latter of which carried out two weeks of excavation on two trenches and extended the survey to the edges of the forestry clearing. 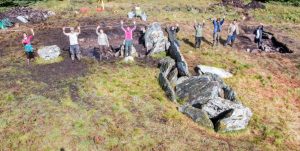 Some of the Giant’s Grave excavation team lined up along the façade with the chamber in the foreground and Trenches 2 and 4 in the background.

In 2017, the team was fortunate to be able to stay on site for three weeks and excavate a further three Trenches (Trenches 2, 4 and 5) and conduct additional geophysical, photogrammetric and 3D laser scan surveys.

One of the main questions for the 2017 excavation season was attempting to decipher the size and shape of the cairn. While the initial electrical resistance survey did not help, another method called Electrical Resistance Tomography (ERT) generated a huge amount of data. When combined with the detailed topographic survey it will help to construct a 3D model of all subsurface high resistance, which will hopefully help in extrapolating the full shape of the cairn (if it survives to its original extent).

The excavation was then focused on the front of the monument. One exciting discovery was found in Trench 4. On the west side a cist was discovered, within which was found a complete, but damaged, pot. The whole pot was lifted out, along with its content, for excavation in the laboratory. The content will be analysed and the pot professionally conserved. This vessel, and some others found, are thought to be Bronze Age in date, with the cist pot likely to have accompanied a burial or contained cremated remains.

The construction of the cist and the deposition of the pottery vessels in association with a possible burial represents a fascinating insight into the continued importance of the Neolithic cambered cairn, which would have been constructed thousands of years earlier.

Another interesting discovery was found in Trench 5. This trench was a spread of complex looking high-resistance geophysical anomalies, which are thought to be a tumble of cairn material that rolled down the slope. Below the rubble, a finely worked, but perhaps unfinished, leaf-shaped Neolithic arrowhead was found. 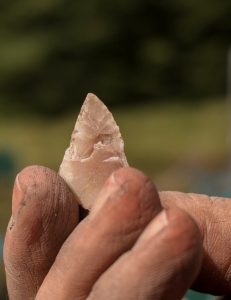 In conclusion, have learned a great deal from the 2017 excavations about the construction, appearance and dismantlement of the chambered cairn. While our picture of its use in the Neolithic is not as clear, we got some important insights into the continued use of the monument for burial and perhaps other rituals in the Bronze Age. This sense of reverence, however, may have disappeared by the Early Iron Age, when much of the stone from the cairn seems to have disappeared to be reused elsewhere, leaving most of the megaliths, which were perhaps too heavy and unnecessarily big for what was needed. Although the excavation is finished in the field there is an enormous amount of post-excavation studies still to take place. All our finds and environmental samples are going to be looked at by appropriate specialists and will hopefully bring further insights into the environment and the activity on and around the site.

If you would like to read a fuller description of the excavations, looking in detail at each of the trenches and their analysis, we have a more detailed description available as a PDF.