The transition from mobile hunting and gathering to Neolithic farming lifestyles is one of the most pivotal events in human history. The Neolithic emerged in Southwest Asia around 11,000 years ago, and then spread across Europe, reaching Scotland sometime around 6000 years ago.

Islay Heritage is exploring the appearance of the Neolithic on Islay by studying one of the first Neolithic burial tombs on the island: Slochd Measach, otherwise known as the Giant’s Grave. This Neolithic chambered cairn is located in the forestry plantation between Nerabus and the summit of Beinn Tart a’Mhill, and is currently undergoing excavation by the University of Reading in collaboration with Islay Heritage.

Several Neolithic burial tombs are known on Islay. They have rectangular shaped chambers constructed from slabs of stone, and would have been surrounded and covered by a cairn made from stones – we call these tombs chambered cairns. The Giant’s Grave appears to have been the largest Neolithic Chambered Cairn on the island.

In 2015, geophysical surveying techniques and small-scale test excavations were used to begin exploring the burial tomb. Further archaeological excavations were carried out in late August 2016, by Prof. Steven Mithen, Dr Darko Maričević and a team of archaeologists and students from the Universities of Reading and Bournemouth. A report on that excavation can be found here ‘Giant’s Grave 2016 Excavation Report’.

Darko then completed the current field project with an excavation in the summer of 2017. This was focused on deciphering the size and shape of the cairn. There were also some exciting discoveries, such as a complete, yet damaged, Bronze Age pot and a finely worked leaf-shaped Neolithic arrowhead.

A more detailed description of these excavations are also available as a PDF, as is the full excavation report. 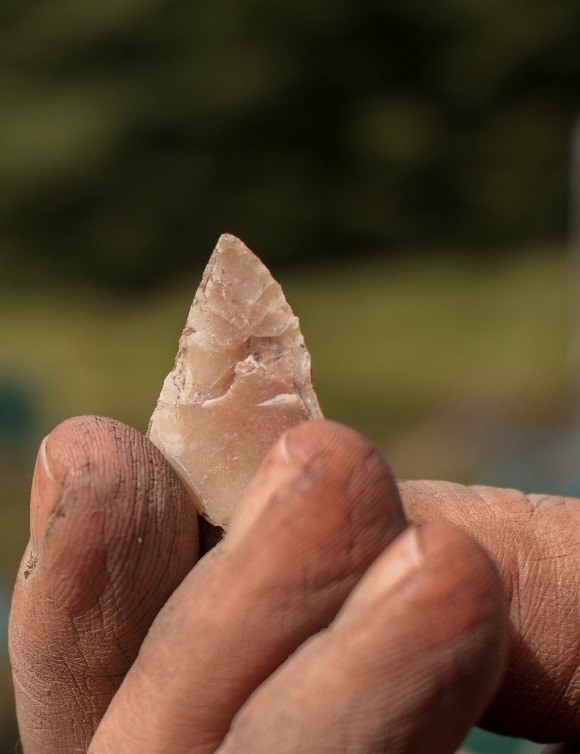 Post-excavation studies will begin in the autumn of 2017, including the analysis of the excavated artefacts and radiocarbon dating to establish the chronology of the monument.

These excavations have revealed a previously unseen architecture of the tomb enabling the team to unravel the complete history of the monument from its construction in the Early Neolithic through subsequent use in the Bronze and Iron Ages to the post-medieval times. The cairn belongs to a so-called Clyde group of chambered cairns, of which there are six on Islay. It is believed they date to a period between 3800 and 3500 BC and represent some of the earliest monuments built in the west of Scotland by the first farmers, which replaced previous Mesolithic population, reliant on hunting and gathering.

The tomb has a chamber with four compartments, with the two inner compartments having been constructed from massive stone slabs. Because of the acidic peaty soil, no human bones have survived within the compartments. Many of the stones are very large, suggesting there had once been an impressed façade to the tomb, one designed to both honour the dead and to impress visitors.

Dr Maričević presented the results of the excavation in a public lecture held at the Ionad Chaluim Chille Ìle on Wednesday 31 August 2016.

The 2016 excavation provided a unique opportunity for children from Islay’s primary schools to visit the monument and learn about prehistory and archaeology. Children from Bowmore, Port Charlotte, Port Ellen and Keills Schools took part in typical archaeological fieldwork activities including excavation, geophysical survey, archaeological photography and recording. More information about the schools project can be found on the schools project page. The excavation was also the destination for a Natural History Trust ramble, with a large group enjoying the walk through the planation from Nerabolls.

We are very grateful for the kind support and interest from so many people on Islay, and to the landowners, Historic Environment Scotland and others that have made the excavations possible. They are planned to continue next year.

Report of the 2017 Excavations